After a decade of planning and working (on and off) on this project, the novella Dragon’s Song was launched on October 25, 2015. This is a fine art letterpress chapbook, published by Running the Goat Books and Broadsides. The novella, written by Newfoundland author Bernice Morgan (yes–she’s my mother!) describes a woman living in Coley’s Point, Newfoundland. While she mourns the loss of her husband, she thinks back to their time as naive missionaries in revolutionary China and the tragic event that happened there. I created the illustrations as Newfoundland images with an Asian sensibility. This project introduced me to woodblock engravings, which I have continued to create, and sell at various outlets in St. John’s.

I am also very interested in letterpress printing. “Room, Room” (22″ x 16″) above, combines the text from the traditional Mummers play with a woodblock engraving I made about the contemporary Mummers parade. It was printed on the Chandler press at the Coaker Foundation’s Advocate Press in Port Union on Okawara paper. 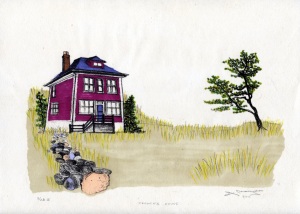