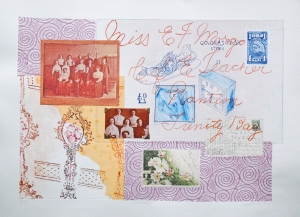 “C. of E. Teacher” and “The Mysterious Flame of Queen Latifah”

I often like to listen to audio books when I’m working in my home studio. Sometimes I miss pages and have to rewind, but often I’ve found that the book I’m listening to begins to inform my artwork. Last September, when I started the finishing work of this collage, I was listening to the book, “The Mysterious Flame of Queen Loana” by Umberto Eco. I should clarify that this book is not called “The Mysterious Flame of Queen Latifah,” as I mistakenly told my friends–but it should have been! The Queen Loana in Eco’s novel is a pop culture creation, much like our modern day Queen Latifah, but maybe less a celebrity and more confined to her comic book setting. Or not.

The pretext of Eco’s book is that an Italian man wakes up in hospital with no idea of who he is. The doctors tell him he has been unconscious and has suffered memory loss. But his long-term formal memories remain, it is his personal memories that have disappeared. The book spools out like a mystery novel, as the main character, Yambo, searches for clues about his own life. His first conversation is composed of quotations he had memorized. People tell him stories about his life, but he fears that he is constructing a fake past from the memories of his friends and family. Yambo returns alone to his rural family home, and in an attic, begins to read the literature and listen to the music of his childhood.

I found the catalogue of the items in the attic fascinating and particularly compelling as I worked on a collage of images and artifacts found in our old family house in Coley’s Point. But as Eco’s novel continued, I was struck with how sympathetic Yambo’s problem was with mine. We have no photographs that identify Emma Morgan, the young woman who received these postcards I’ve been studying. And, because she only kept postcards sent to her, we don’t even have her writing. All I have to go by are what her friends and family sent her.

From badly written poems of his youth, Yambo deduces that he was in love with a beautiful blond. And he comes to believe that he spent his life looking for that woman. But then he finds the comic book about Queen Loana and her mysterious flame. Maybe Queen Loana was the template that made him fall in love with the mysterious blond. Eco seems to suggest that Yambo is a collection of stories that inspired his sex drive and his reactions in times of danger. My gut reaction is to disagree with such a mechanistic view of personality. But I’m also wondering–who am I if you take away my stories?

I have included in this collage a photograph of a group of people standing formally, behind four seated people. The women wear black skirts and white blouses, they all have their hair up. We have no idea who these people are–but I have decided that it is a photo of Emma Morgan’s teachers and graduating class of fellow future teachers. In the second row, one person over from the left, stands a short, spunky looking young woman with dark hair who fits the only physical description I have of Emma Morgan. I have decided that this woman, with the wisp of a smile, is Emma: standing in front of the photographer, about to start her new life.

I have coupled this photo of “Emma” with things from the house: the marble shoe with the lion on it was a souvenir from Europe, the wallpaper design would have been bought and put up by Emma and her sister Lizzie. I have included embroidery, because we do have a sampler from Emma’s mother, and there is the title of a self-improvement book, and a clock, the latter probably from the 1930’s. These are all things found in the house–but I have created a fiction. I have no idea who Emma was. The only thing I can say for certain is that, as in the postcard’s address, she was the Church of England Teacher in Rantem, Trinity Bay, in 1910. Emma, like Yambo, is an invention. I have created her, from these artifacts, and she invented herself, like Yambo, from her education, literature and culture.

Another question I’m asking myself is, is there anything that makes this collage distinctly “Newfoundland” art? I can see British influences, certainly with the sad and disappointed face of Victoria looking out from the postage stamp, but, aside from the island’s name on the stamp, and the address, this collection of memorabilia, could have come from any part of the British Empire, or in the case of Newfoundland, the former Empire, in the 1910’s.

The real Emma married Kenneth Reid, had children and moved to Boston, where she died in 1970, a U.S. citizen. Since we know so little about her, I feel free to create the spunky, ambitious, fisherman’s daughter that I’ve deduced from the pop images and text in these postcards and the pretty feminine things she left behind. But please be aware as you enter these images, this art just as much a historical fiction as my cousin Trudy Morgan-Cole’s novel “That Forgetful Shore.”

2 thoughts on “C. of E. Teacher and The Mysterious Flame of Queen Latifah”